Resinex website uses cookies and similar technologies to better understand which products are of your interest so we can personally provide you with more detailed information. By using Resinex website you agree to our use of cookies. Learn more about cookies and how to manage them

Polystyrene is one of the oldest thermoplastic polymers dating back to the 1930’s when BASF in Europe and DOW in the US pioneered the developments of PS. After some mergers and takeovers, the most important polystyrene producers are Trinseo, Styrolution and Total. 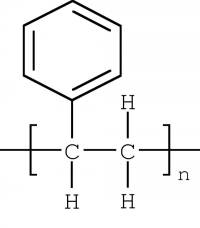 Polystyrene grades can be divided into two main groups:

HIPS, high impact polystyrene, is polystyrene which has butadiene rubber as impact modifier, giving the material good impact performance, but losing the transparency.

Polystyrene is easy to process, has a nice gloss and it is still the most preferred material for thermoforming. The most well known polystyrene application is yoghurt cups.

Another big thermoforming application of polystyrene is the inner liners of refrigerators and freezers, for which special high ESCR (environmental stress crack resistance) grades have been designed.